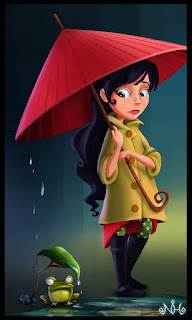 A Ballad of China

Her Name was Dilliki Dolliki Dinah;
Niece she was to the Empress of China;
Fair she was as a morning in May, when Hy Kokolorum stole her away.
Hy was a wizard, I'd have you know;
Wicked as weasels and black as a crow;
Lived in castle a-top a hill;
Had a panther who's name was Bill;

Used to ride him around and around,
creeping and peeping close to the ground;
Working mischief wherever he could;
Nothing about him in anyway good!

Saw the maiden one midsummer morn,
(sweetest creature that ever was born!),
Creeped and peeped in his wizardly way,
Catched her and snatched her and stole her away! 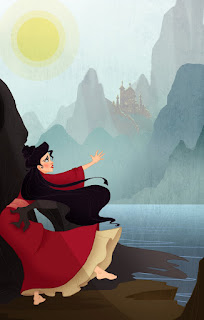 All through China arose a cry:
"Some one has stolen out Dilliki Di!"
People gathered in every Forum,
Crying, "it must be Hy Kokolorum!"

All the Barons in China land,
Ling the lofty and Bing the Bland,
Kong the Kingly and Bond the brave,
Vowed a vow to find and save

Darling Dilliki Dolliki Dinah
(niece you know to the empress of china;
Fair you know as a morning in May),
Whom Hy Kokolorum had stolen away.

Now in a kingly, ringly row,
Round and about the hill they go,
Ling the lofty, Bing the bland,
Kong and Bong, and there they stand,

Weaving a weird and spinning a spell,
All with intent to quash and quell
Hy kokolorum, worker of woe,
Wicked as weasels and black as a crow.

Dilliki Dinah was weeping her fill,
When stepped up softly the panther Bill;
Whispered," if you will give me a kiss,
I'll turn your sorow into bubbling bliss!" 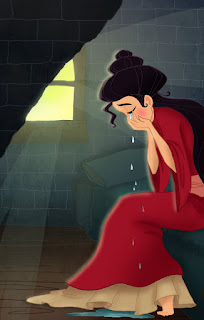 she, to animals always kind,
Said," No! Really? Well, i dont mind!"
Dropped a kiss on his nose so pink,
And-goodness gracious! what do you think?

He turned into a beautiful Golden King,
Crown and scepter and everything!
Ran the old wizard through and through,
Saying, " now there is an end of you!"

Caught the maiden up in his arms,
Broke through the net of spells and charms,
Cried to the barons Bold and Brave,
"I've had the honor to find and save

Darling Dilliki Dolliki Dinah
Niece (i learn) to the Empress of china,
Fair (i swear) as a morning in May
And she is my queen to this very day!" 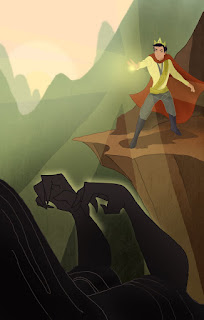 ONCE UPON A MIME 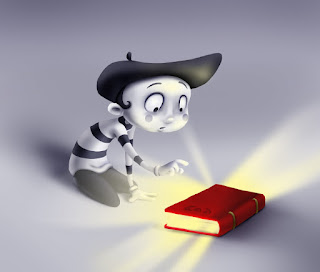 Noël
I am currently an artist and animator in the game industry. I love painting, drawing and simply art in general! Thank you for visiting my site! Enjoy!